This article applies to macOS only.

This article applies to iOS only.

Warning: With the release of macOS 10.15 Catalina in October 2019, Apple has removed all support for the 32 bit Carbon framework from the operating system in favour of the 64 bit Cocoa framework. Consequently, the Carbon widgetset is no longer being developed.

This page gives an overview of the LCL Carbon interface for macOS and will help new developers.

For installation and creating a first Carbon application refer to Carbon Interface.

What is already working ? 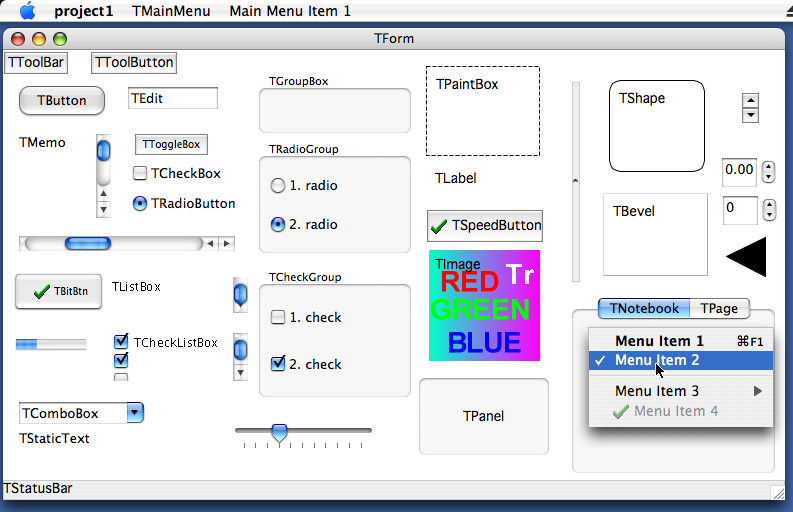 What needs to be done next?

If you want to draw (via TextOut, TextRect) or measure (via TextWidth, TextHeight) text divided into various parts and rely it will be displayed same each time not depending on its division, you have to disable some default typographic features (like kerning, fractional positioning, ...) of Canvas. You can choose one of the following:

The only possible efficient way of taking a screenshot on macOS is using OpenGL. Apple provides a demonstration function which returns a CGImageRef with the screenshot. This function was converted to Pascal and is available on the glgrab.pas unit on the carbon interface directory. This function requires the Apple-specific parts of the Apple OpenGL headers, and those aren't yet on the FPC Packages, so they were translated and are located on lazarus/lcl/interfaces/carbon/opengl.pas until they are released on a stable Free Pascal.

After obtaining a CGImageRef, the next step to implement the RawImage_fromDevice method is obtaining a local copy of it's pixel data. It isn't possible to directly access the bytes of a CGImageRef, so the image needs to be drawn to a CGContextRef which uses a memory area allocated by us as buffer. This method has the great advantage of converting from the internal format of the screenshot bytes to the very convenient ARGB, 32-bits depth, 8-bits per channel format that is default to LCL.

There's no way to say if control is text-input or not. Native OS controls will handle focus themselves. The Carbon Widgetset checks if bound LCLObject is SynEdit and will switch the focus to it.

Because Quartz 2D's clipping is decreasing, care must be taken for proper clipping region change. There should be no code, that changes CGContext's clip region directly. Carbon widget API's functions should be used instead.

These are things that will probably never be solved.

Release mouse capture is not supported

Because Carbon applications are executed via Application Bundle, command line parameters are not passed. You have to use OnDropFiles event to detect openning associated files.

Shortcuts indication is not supported

Drawing on Canvas outside OnPaint event is not supported

Drawing on screen device context is not supported

TEdit.PasswordChar different then default is not supported

TMemo.WordWrap when is disabled, does not allow to scroll text horizontally

It’s some times necessary to access system windows or control handles directly. For example, you wish to use some system features that are not available (not yet implemented?) for LCL. It’s very common for LCL Windows developers (and Delphi developers) to use TControl.Handle property, since Handle is a system window handle for Win32 widgetset. It can be used with any system function. But it’s not so for Carbon widgetset. TControl.Handle would return handle native to widgetset not macOS. TControl.Handle would return TCarbonWidget class (declared at CarbonDef unit). This’s a wrapper class, and you can use it to get system handle.

You should also note, that there’s difference in getting WindowRef in LCL versions. If you’re using Lazarus 0.9.26 or earlier you should get WindowRef in the following way:

If you’re using svn LCL version (latest trunk), then you should use the following way:

Keep in mind, that LCL is designed to be cross-platform library, and accessing system handles to use with system functions makes you program hardly portable. The way of getting system objects handle might also be changed in future.

Checking if the TTrayIcon menu is visible

Unfortunately Apple only added a facility to check menu visibility in Snow Leopard 10.6. To overcome this limitation in a simple way in previous versions one can use the following code, which should work in previous versions using a class method in TCarbonWSCustomTrayIcon:

How to add a new control

TButton is defined in lcl/buttons.pp. This is the platform independent part of the LCL, which is used by the normal LCL programmer.

Its widgetset class is in lcl/widgetset/wsbuttons.pp. This is the platform independent base for all widgetsets (carbon, gtk, win32, ...).

Its Carbon interface class is in lcl/interfaces/carbon/carbonwsbuttons.pp:

Every WS class that actually implements something must be registered. See the initialization section at the end of the carbonwsXXX.pp unit: