GeckoPort is a Lazarus/Free Pascal version of Takanori Ito's Gecko SDK for Delphi, including the TGeckoBrowser component. Version 2 is based on automatically generated include-files from the idl files from the Gecko SDK. For this purpose the idltopas utility is used. This way it's earier to follow the fast Gecko-release cycle now gecko-developers do not maintain backwards compatibility anymore. You can find more information about the old version of GeckoPort here.

Current sources are based on Gecko 9, as Gecko 10 has a bug preventing it from being embedded. 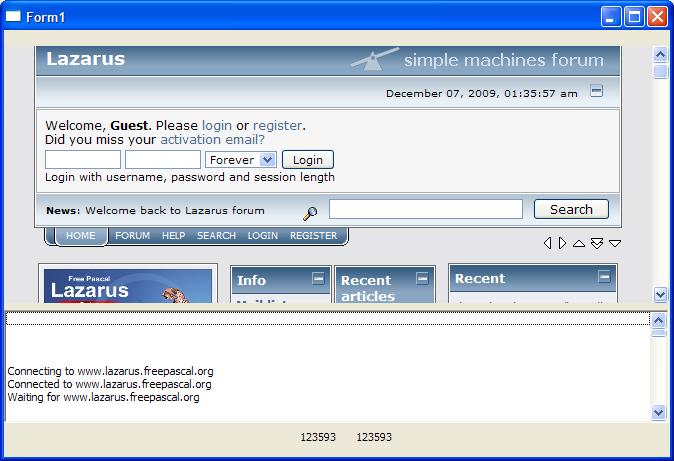 To compile a sample app:

Note that you'll need the Gecko libraries installed before you can run one of the sample apps. If necessary, use an installer from here:

You can download the sources from the GeckoPort from the Lazarus-ccr using Subversion:

To install this version, go to the (local) source-directory and use

The '-o -gl' parameters are to include debug-info.

The ChromeWin and GBrowser sample apps work the same as they do with Delphi.

Currently the code looks for a xulrunner in the following order:

With Free Pascal 2.4.x and 2.5.1 on Windows, you must disable floating point exceptions as soon as possible in your program. Add the Math unit to your uses clause and add the following statement at the beginning of your program:

Note that this will disable floating point exceptions in all code, not just in the Gecko libraries. See the sample app .dpr files for examples of how to add this code.

Firefox runner is now working, tested with Firefox 3.6.12 but the application exe MUST be in the same folder as Firefox or you will get a hangup now of them.

A native window must be passed in to initialize the browser component. On OS X, this must be a Cocoa window, otherwise the Carbon widgetset will not work.

You will also need to set the app's widgetset to Cocoa, since the default is Carbon. Or you can compile ChromeWin.lpi with lazbuild and specify the --ws=cocoa switch. See the lb-cw-cocoa.sh script for an example.

To run the ChromeWin sample app, you need to set DYLD_LIBRARY_PATH so that the XUL library can load the other Gecko libraries it depends on. A simple way to do this is to start ChromeWin.app with the included run-cw-mac.sh script. Note that this script assumes that you have the XUL.framework installed.

The GBrowser sample app will crash because of the current incomplete state of the Cocoa widgetset.

On Linux, be sure to set the LD_LIBRARY_PATH environment variable to the xulrunner directory before running one of the sample apps. For example:

The Gecko detect code in Linux gets the LD_LIBRARY_PATH environment variable and looks for a suitable XULRunner which path is in it.

Currently sample apps works in Linux/Ubuntu 9.04 using Lazarus 0.9.29 and fpc 2.5.1 with some paint problems that I think will be resolved soon and seems to be related to GTK2 interface.

Please report testing success or failure to the GeckoPort maintainer: