MultiDoc is a Lazarus component to replace the standard MDI interface.

This component permit to write pseudo-MDI application with Lazarus. It is not a real implementation of the MDI interface but it give to your application the capability to use many resizable sub-form.

There are two components:

I do them with a graphical software in mind but they are probably useful for a range of applications. 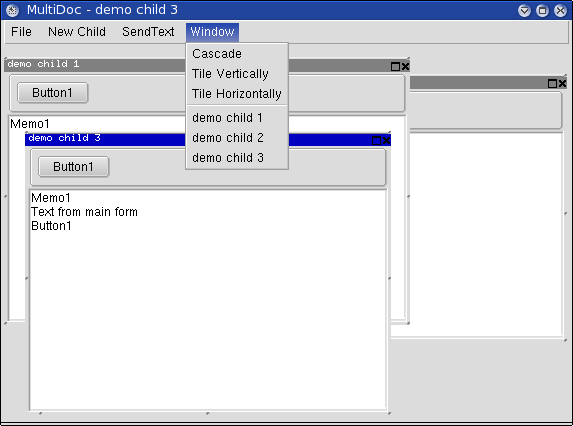 The component in version 0.1 and 0.2 and a demonstration program can be found on the Lazarus-CCR sourceforge site.

The component in version 0.3 and 0.3.1 can be found here. (link is broken, is someone having the file can upload somewhere?) but could be find here :-)

Another download link of MultiDoc & LMDI (working in June 2017): https://github.com/mehmetulukaya/laz-components

A number of small fix where added to version 0.2 over the last years. If you use this version that not depend on LMDI you can get the most current version from the Skychart project.
Type the following command:

Since 2012 I replace the use of this component in Skychart project by Multiframe.
It work almost the same but use frames for the child windows, so it no more require the main TPanel trick.

To get this component:

This component is exclusively derived from high level standard component (TPanel, TCustomSplitter, TSpeedButton). It must work on all the Lazarus platform without change.

Tested on Linux and Windows.

You are not limited to show the docking area in the full main form. You can place the TMultiDoc anywhere you want or use multiple one! A combination with a TNotebook may give something similar to a multi-desktop.

This example can be used as a skeleton for a new application.

Converting a MDI application is simplified by the availability of the same component for Delphi and Kylix.

Convert first your application to MultiDoc in Delphi,then convert to Lazarus. This require some work but among the advantage you avoid the ugly XP border around your child forms.

Replace the standard MDI function as below:

The Delphi component is include in the package. Unzip multidoc-delphi.zip and install MultiDocD6.dpk or MultiDocK3.dpk.