ODBC (Open Database Connectivity) is a technology that allows one to connect to a whole variety of databases using a single API, the ODBC API.

There are ODBC implementations for various platforms and there are drivers for most Database Management Systems. Official ODBC documentation can be found at the MSDN ODBC site.

FreePascal ships with ODBC headers; they are in the odbcsql and odbcsqldyn units. TODBCConnection is an TSQLConnection descendant providing a nice OOP wrapper for ODBC using the SQLdb framework.

What has been implemented:

What is left to be implemented:

FreePascal ships with components for connecting to several databases, such as MySQL, PostGreSQL, Firebird, Microsoft SQL Server (since 2.6.1), Oracle, etc.

For those databases missing from the list, like MS Access and perhaps Microsoft SQL Server, ODBC is an acceptable and well established solution. (VB.net/C# developers are recommended to use SQLClient rather than OLEDB or ODBC for the ultimate in performance, but here in Lazarus ODBC will work adequately and reliably)

The TODBCConnection component was developed originally to circumvent the strict MySQL license for applications that are not GPLed or do not obey MySQL AB's FLOSS exception.

Before you can connect to your database using ODBC, you need to install

This section will give a brief overview of the steps involved. However, please consult the relevant documentation for a definitive reference.

Windows has an ODBC Driver Manager built in, which allows DSNs to be set up, and other configuration. It is found in the Control Panel, in later Windows versions with categorised sections it was moved into the Administrative Tools area. Or you may simply click the Start button and enter ODBC into the Run box (in Windows 7 this appears as "Search programs and files").

You can, of course, create a desktop shortcut to the ODBC dialog if you find yourself using it frequently. 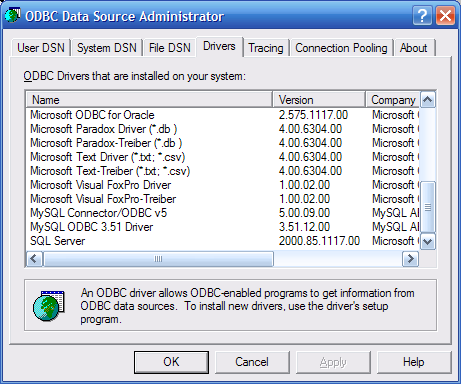 Two popular ODBC Driver Managers for Unix-based platforms are unixODBC and iODBC. ODBCConn is known to work with unixODBC; iODBC compatibility still has to be tested.

For Debian, you can install the unixodbc package:

The odbcsqldyn unit, and hence odbcconn, will search for a file called libodbc.so. It will not accept a file named like libodbc.so.1 or libodbc.so.1.0.0. Debian's unixodbc package does not create a symlink with the name /usr/lib/libodbc.so; you must either

If you installed the unixodbc-bin package, you can run the ODBCConfig program to configure ODBC drivers and DSNs. 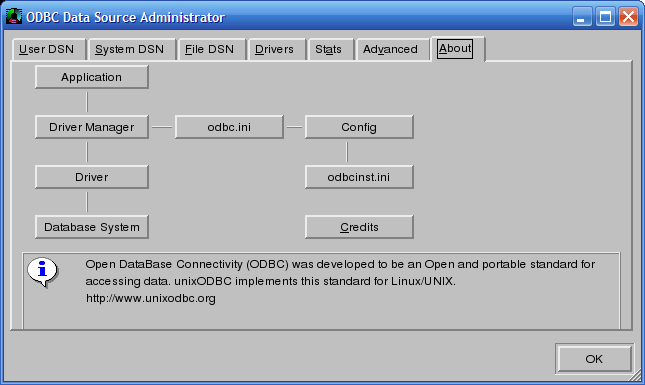 For Ubuntu, follow the instruction for Debian. Note: the unixodbc-bin package might not be available from the default package repository.

You can download latest ODBC drivers using the following links:

Download PostgreSQL 32/64 bit ODBC driver - latest version of PostgreSQL ODBC driver which supports Windows, Mac OS X, Linux both on 32 and 64 versions. Compatible with PostgreSQL server versions since 7.1 up to 9.4. Works on all Lazarus versions.

Connecting to an ODBC data source

The parameters for connecting to an ODBC data source are described in a connection string. This is a string of the form NAME=VALUE;NAME=VALUE.

TODBCConnection provides a wrapper around this connection string. Some of its properties are mapped to name-value pairs in the connection string, and custom parameters can be specified in the Params property (which is a TStrings).

Before going to the details of this wrapper, you must first have a basic understanding of how an ODBC data source is identified.

An ODBC driver manager provides alternative ways to make DSN shortcuts for a set of parameters:

The parameters in a DSN or File DSN can always be combined with additional parameters in the connection string, for example to specify a password.

An advantage to using a named DSN is that you may easily switch between databases using the ODBC Manager, without changing your code. This is useful in commercial development to test for bugs using a number of sets of your clients' data.

You may also connect via ODBC without using a DSN, simply supplying all the details in the Connection String that you would otherwise set up in a DSN (driver,server,database,login details). This more direct method avoids the need to set up a DSN when installing your application on a new machine.

The ODBC specification defines a few parameters that can be used in a connection string:

All other parameters are driver dependent. Please refer to the documentation of the specific driver to learn more about available parameters and their names.

Note that TODBCConnection will take care of escaping parameter values in the connection string (when required).

The LoginPrompt boolean property is not implemented yet. It would require finding the correct window handle, so a driver can show a GUI dialog to specify parameters. Note that this is not controlled by the connection string, but rather by the last parameter to the ODBC API function SQLDriverConnect.

In this section, examples are given of connecting to certain DBMSs using their specific ODBC drivers.

Probably works on Windows only.

For a reference of supported parameters by the MyODBC driver, see [1].

Additionally you may check this mysql odbc connection guide. It has a detail explanation of how to connect to MySQL using ODBC.

The driver name differs a bit depending on the platform and MyODBC version; examples are :

Other parameters (when not using a DSN) :

Use this mssql odbc driver connection examples which include step by step tutorial and connection strings.

Use this odbc oracle connection guide to perform easy and painless connection to Oracle.

Use this postgresql odbc connection guide to perform easy and painless connection to PostgreSQL database.

Use this sqlite odbc connection guide to perform easy and painless connection to SQLite database.

Use this firebird odbc connection guide to perform easy and painless connection to Firebird database.

On Windows, you can use something like this with an existing named DSN:

Using a trusted connection (also known as integrated security or SSPI) means you login using your Windows user credentials. You can omit the Trusted_Connection line, but then you need to specify user ID (Uid=...) and password (Pwd=...).

The example code below selects the rows from a MS SQL Server table called 'journal_entries' and displays all the values of column 'journal_entry' in a Memo control called Memo1.

In fact it is possible to use conn.Params for all parts of the connection string, if we modify the above - this time showing the SQL Server version in a pop-up message :

Functions are supported - e.g. 'SELECT * FROM MyTestFunc()' - but there may be issues with Stored Procedures that return recordsets. For example, if 'EXEC MyStoredProcedure' returns data rows (verified in SQL Server Management Studio or with the SqlCmd DOS command: C:\>sqlcmd -S MyServer -E -d MyDataBase -Q "exec MySP") then query.open will give an error : "Cannot open a non-select statement" (this may be fixed after FPC 2.6)

To call a Stored Procedure or to issue other SQL commands that return no rowsets (CREATE,INSERT,UPDATE,DELETE), use query.ExecSQL instead of query.Open

The use of Parameters is recommended to avoid SQL injection vulnerabilities. In this case the SQL statement isn't built with values directly, but a named placeholder is used instead - and then the parameter is specified separately. Using this method it isn't possible to inject malicious SQL commands into variable fields in an attempt to tamper with the database; the server then knows specifically what part of the statement is a value and what is command. For example, instead of building a WHERE clause directly with the value 95 ('... WHERE field2>95'), instead use a named parameter like 'testval' -

In Lazarus 1.2.4 (FPC 2.6.4), ODBC transaction behaviour has changed. This may cause previously working code to stop working.

For a solution, see User_Changes_2.6.4#TODBCConnection_.28odbcconn.29_No_longer_autocommit

Each ODBC API call also returns a succes code; if there is an error, more information can be retrieved using calls to SQLGetDiagRec. (For the sake of completeness: diagnostic records are also available when an API call returns SQL_SUCCES_WITH_INFO.)

TODBCConnection checks the return code of each ODBC call and contructs an EODBCException. The message of this exception consists of:

If you get a 'Function sequence error' in the finalization section of the ODBCConn unit, then you probably did not properly clean up all you queries and connections.

Rollback does not work

commands but your SQL is committed regardless, your ODBC connection probably is in AUTOCOMMIT mode; see the remarks about the AUTOCOMMIT connection parameter on how to correct this.

Most ODBC managers have a tracing option in which all ODBC API calls are logged to a trace log. This can be very useful for debugging an ODBC application. The ODBC Data Source Administration GUI of both Windows and unixODBC have a tab where you can configure the tracing option.

Of course the trace log is mainly useful for developers that are familiar with the ODBC API, but it can help to identify the problem. Also, you can attach a trace log if you report a problem to the bug tracker.