This tutorial shows how to create a chart with multiple series in their own panes and with their own left axes and one common bottom axis. It was created while checking out the nice "Panes demo" which you can find in the folder components/tachart/demo/panes of your Lazarus installation. Since a second topic is included in this sample project it may be a bit difficult to catch the basic idea. So here we explain how you can do this from scratch.

The setup of charts, axes, series and panes in TAChart is not done from a single dialog window. Instead you add components and change their settings in the object inspector to get the wanted behaviour.

Three types of components will be needed for the demo:

At designtime a series is added to the chart using the Series Editor. The chart component has a property called AxisList where additional axes can be added. This one is important.

Start a new project and save it. Drop a TChart on the main form and align it to client. Right-click the chart to access the Series Editor. Add three LineSeries from the Series Editor. Set the SeriesColor of the three series to clRed, clBlue, and clLime, respectively.

Add random data to the series

Add three TRandomChartSource components to the form and set their values using the Object Inspector:

Now you will have visible graphs on the charts. But the chart is very crowded because all series still share the same axis.

Now we are going to create the separate axes. Click the chart, go to the Object Inspector and find the charts AxisList property. Bring up the AxisList Editor and add two more axes of the "Left axis" type. The new axes will have the indices 2 and 3. (The old, original y axis has the index 0 and the x axis has index 1).

Go to the Series Editor again and:

An axis has a property named Group. By setting all left axes to the same group, the values are put together in a vertical line. For each Left Axis in this example, set the Group property to 1 and leave the Bottom Axis at 0.

Go to the AxisList property of the Chart and bring up the AxisList Editor. Edit the Marks.Range of each y axis so that they look like this:

This step separates the axis labels of each pane. Otherwise, the labels of one pane would overlap those from the other panes.

(Accordingly, you can also set the Range properties of each y axis (without the "Marks"!) in order to achieve a consistent scaling of the three axes).

In order to split the three series into separate panes we need to transform the axis coordinate system such that each axis is drawn only in its own region. This is done by means of ChartAxisTransformations.

TAChart employs three coordinate systems in the transition from "real world" data to the pixels on the screen:

Note that these numbers are offset by 0.15 from the thirds discussed above (0 to 2, 2 to 4, and 4 to 6). This produces a little gap between the panes and makes the chart more pleasant.

The entire mapping procedure is sketched in the next diagram: 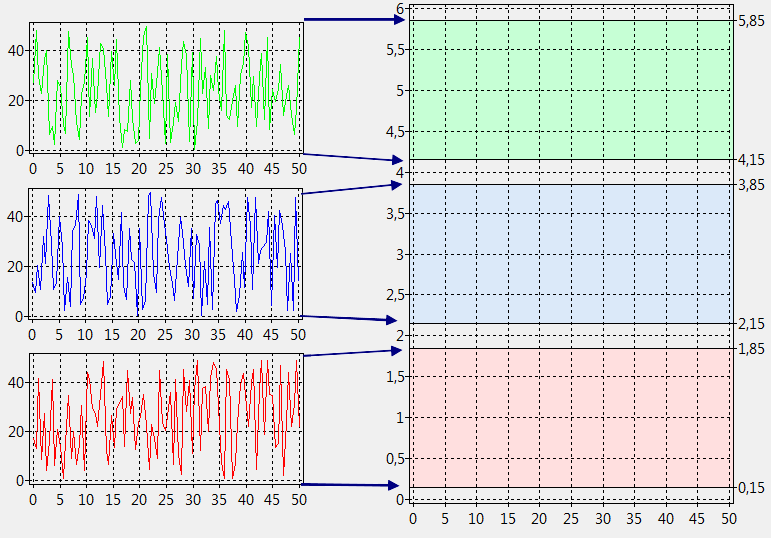 Bring up the Object Inspector for the chart, choose the AxisList property to get the AxisList Editor and connect each left axis to the corresponding transformation. This is done by editing the "transformations" property of each y axis:

To get the correct spacing at the top and at the bottom of the chart we must let the y axis extends match our chosen graph coordinates range of 0 to 6. Go to the Chart properties and edit the these extent settings:

Finally we add titles to the axis. In the Object Inspector set the following properties of each axis:

Set the property Visible of each axis title to true to show the titles. However, you'll notice two issues: 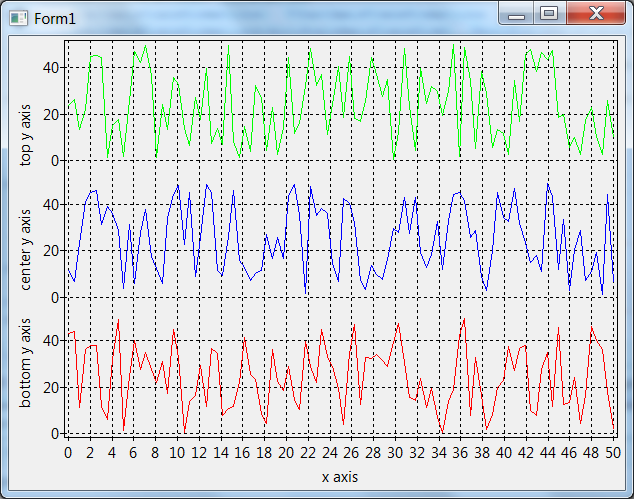