WSL1 is implemented as Microsoft developed Linux-kernel-compatible execution environment. This is not an actual Linux kernel, but only its substitute, which provides the most common functionality.

The functionality is ENOUGH to run FPC without modifications.

You can run control panel (press Win+R type in "control" and press enter) and search for "windows features" in order to bring the dialog up. The link is also available in "Add and Remove programs" section of control panel). 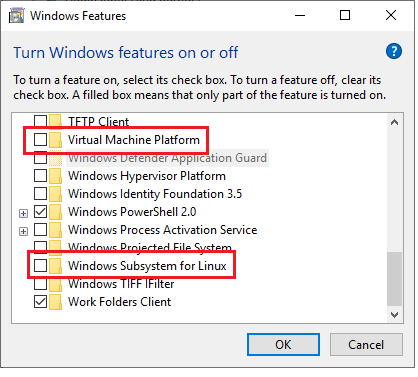 Note: WSL1 only requires "Windows subsystem for Linux" to be installed.

"Virtual Machine Platform" is only requires for WSL2.

Running the test app from Windows

The "wsl" utility can be used to run Linux (x86_64) targets on Windows. If you used the example above to compile the application, then you should be able to run as following, from Windows command-line

Similar to the sample application, FPC itself can also be ran from Windows.

Here's an example create a folder in Windows, and create a file there test.pas. Edit the file (i.e. using notepad) and put the following code:

Run the following commands from command line. Note, that the use of "WSL" is critical (otherwise you'll get a windows binary). (Running the command-line requires both WSL installed and FPC for the distro installed)

You should see in command-line the following output:

Indicating the binary was built for linux 64-bit system

WSL1 provides enough functionality in order for GDB to run.

However, GDB itself is not installed by default (on Ubuntu 16.4 distro) and needs to be installed prior to use

(you should see the size of the executable increasing)

Run GDB for the compiledexecutable.

at the initial-load place a breakpoint within the runloop procedure:

and proceed with the execution:

at this point you can do all typical Gdb actions you need to do. I.e. researching stack:

or terminating the exectuion

WSL2 is a different approach, that's implemented using an actual Linux kernel running in a virtual machine. Namely the entire Linux kernel functionality is available (... and the sky is limit!). Microsoft also addressed some performance issues when writing files to NTFS.

if you running into troubles switching to Version 2, see below.
The process of setting a version takes about a couple of minutes so be patient.

Unable to switch to version 2

If you're getting this error

There are 2 ways you should be able to resolve this: 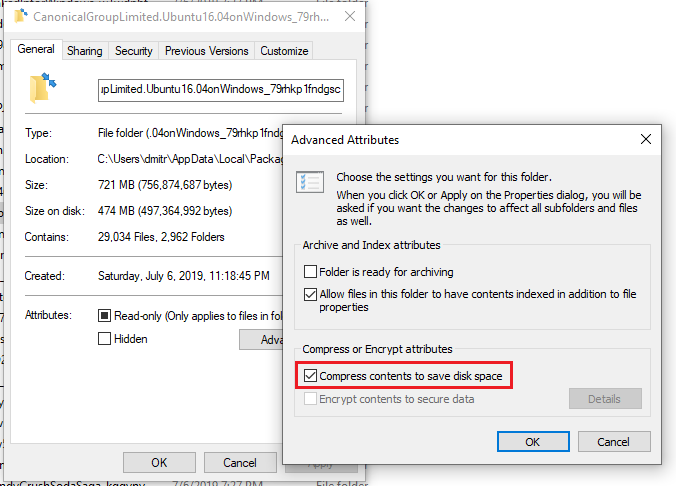 If you're getting an error of Timeout - try to restart the PC.

No additional changes are needed for FPC itself in order to run and compile from WSL2.

In general the installation of GDB is similar to WSL1.

It seems like there were changes in pipe handling in Gdb, compared to WSL1.

would still work, but sometimes pipe communication might fail and you would not see a GDB prompt.

On the other hand, if a user tries to use gdb directly from wsl.exe shell, it works just fine.

Windows itself would not recognize ELF executable as an executable. Thus an attempt to open it would make Windows prompt the user for the host application to be specified. There's not special Windows API yet to run them. So far the only way of running an ELF binary is using "wsl.exe".

That means that a desired Linux distro(s) needs to be installed. (and preferably one of them selected as default)

That typically involves creating a process with StdOut/StrErr redirected to pipes (either by using WinAPI directory or TProcess).

Caveat: there seems to be some special handling of Pipe-redirected output in WSL itself. The launched WSL might not terminate until it receives something on the input buffer. It might also skip some output, if the launching application is "sleeping" for too long. Thus the typical wait for output period should be minimal.

It also doesn't seem that WSL is returning the exit code back.

One can refer to the full code example of "wslwrap" application: https://github.com/skalogryz/wslwrap

WSL itself comes without graphical support by default. Yet it should be possible to install X-Windows server on Windows 10 machine itself, and configure WSL distro to use Windows 10 as its windows server.

That also should open an option for developing and debugging Linux GUI applications using WSL.

As long as Lazarus is capable of "prefixing" every FPC (and Gdb) commands with "wsl" - forcing the Windows Subsystem for Linux to execute, it should be capable of producing native (command-line) executables.

It's likely Lazarus on Windows would also need to substitute the proper file path when dealing with WSL-ed projects.

Dislaimer: the proper solution might require additional work on IDE side. While the compiler doesn't need to be changed at all. It's possible to create a WSL compiler in order to by-pass Lazarus limitations, without a need of building a special cross-compiler.

The such name has two purposes:
1) it starts with "ppc". Lazarus verifies the compiler executable to start with either "ppc" or "fpc", otherwise it would produce (a lot of annoying) warnings
2) "_fpc" part enforces the use of "fpc" executable on WSL side (this is "wslwrap" feature)

The IDE would complain about "fpc.cfg" missing - ignore it. 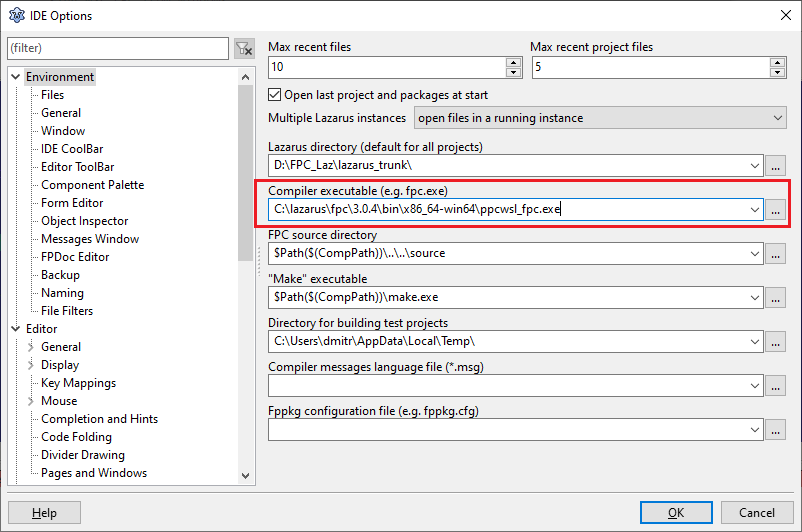 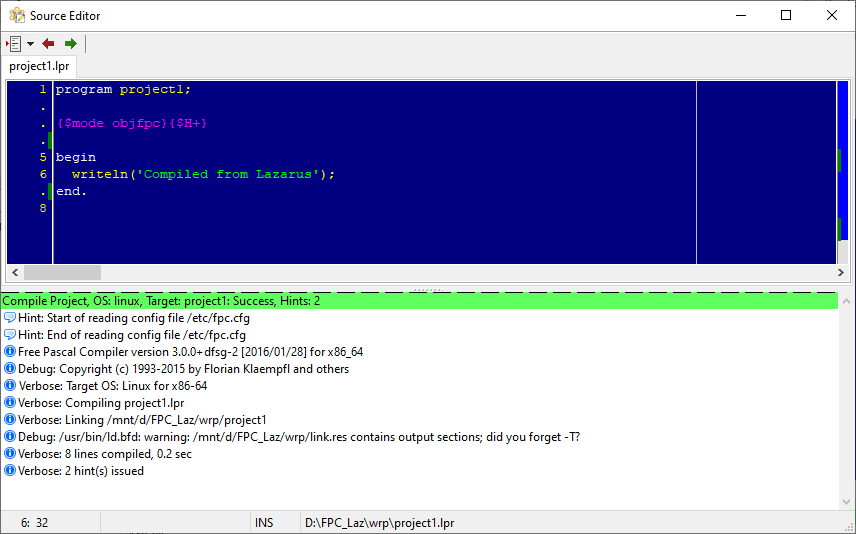 In order to rollback, simply restore the original FPC configuration in the IDE option.