Castle Game Engine (previously "Kambi VRML game engine") allows you to render 3D models in various formats. In particular, support for VRML / X3D format is very versatile. You can define animations, interactions, scripting, shaders and many more in VRML/X3D, so you get quite capable 3D game engine in the end.

Rendering is done through OpenGL. We can use OpenGL context initialized in any way, including Lazarus TOpenGLControl component, our own TGLWindow class (which allows you to create windows with OpenGL context, menu bars and dialog boxes, completely without the LCL), or any other library capable of creating GL context (glut, SDL).

The engine homepage is http://castle-engine.sourceforge.net/. In particular, this page lists all the engine features.

Engine is open-source (core engine may be used under GNU LGPL, with "static linking exception" like FPC RTL), developed in nice object-oriented way, only for FPC/Lazarus. The engine is not dependent on LCL, Lazarus components are just comfortable "extras". 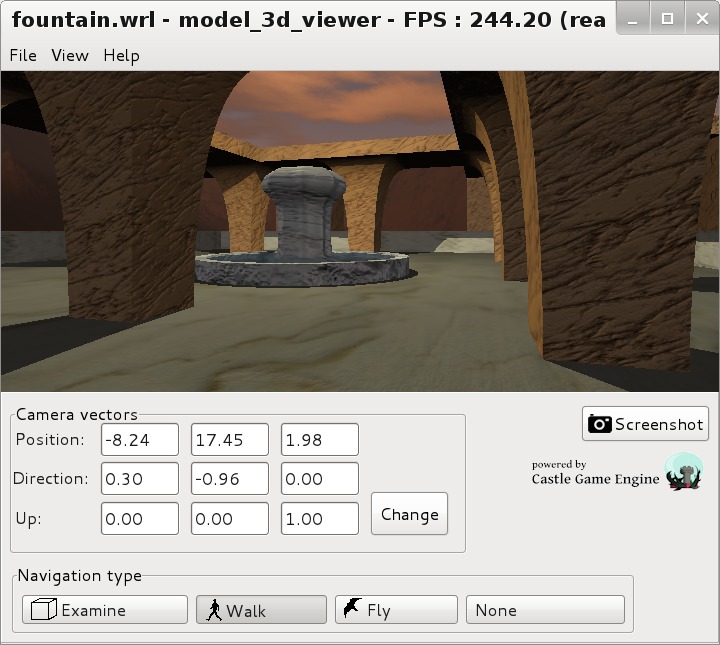 Major components that you can drop on the form:

You just drop TCastleControl on the form, and call

and you're done. Animations work, rendering in OpenGL works, navigation and key/mouse sensors work, etc. For more advanced uses, you can add 2D controls to Control.Controls list, and more 3D objects to Control.SceneManager.Items.

To install Lazarus components, download the engine sources, and see inside "packages/" directory. You want to install packages castle_base.lpk and castle_components.lpk.

For more examples, see inside "examples" subdirectory in engine sources. For example VRML/X3D browser (and viewer for other 3D models) done with Lazarus, see inside castle_game_engine/examples/lazarus/model_3d_viewer/ directory. Full API reference and more high-level documentation about VRML/X3D handling are available.