Difference between revisions of "Custom Drawn Interface/Using the Android SDK, Emulator and Phones"

Go back to Custom Drawn Interface/Android

Downloading and installing the Android SDK is easy. One just needs to following this link: http://developer.android.com/sdk/index.html

How to configure Ant

When issuing 'ant debug' to build and Android project one might receive a lot of errors about missing dependencies. In Linux those can be solved by installing packages which have these dependencies, and that will change from distribution to distribution.

Can be fixed, respectively, with:

Means that you need to update the Paths in your project files to correctly point to the SDK.

Recognition of devices under Linux

Unlike in Windows, where one needs to install a new set of drivers for nearly every phone, in Linux the Android devices are recognized as generic Android devices (regardless of being a phone, a tablet or a notebook) and they are ready to be used without installing additional drivers. One issue, however, that often appears is that devices are not fully recognized automatically and one receives the error message "?????? no permissions". In this case the command adb devices will look like this:

To solve this issue one can proceed with the following steps:

Step 1 - First read the tag of the device using lsusb run as root (or sudo):

If the file doesn't exist yet, then create it. Add the following line to the file:

Change the ID to correspond to the id of your device.

In Ubuntu this can be done with: sudo services udev restart

In Mandriva udev doesn't appear as a service, so the only way to get things working for me was restarting the computer.

After doing this, the device should be fully recognized and "adb devices" as well as "adb logcat" should work.

Step 2: Create a new image, by clicking the New button as in the image bellow. 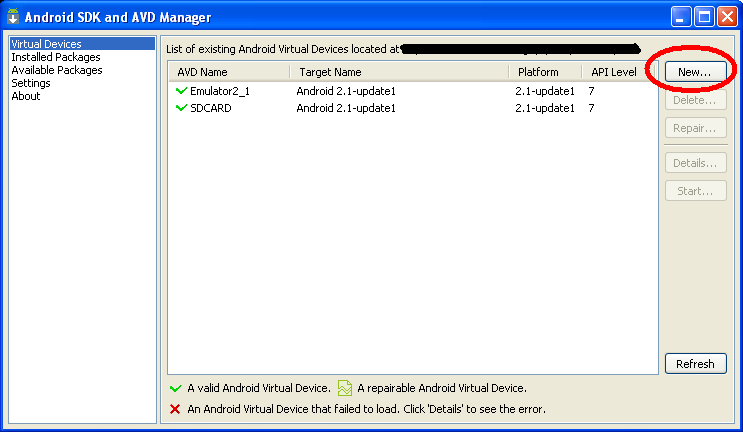 Step 3: Set the name and properties of the image, the size of the SDCard and add hardware support for the sdcard, as seen on the image bellow. 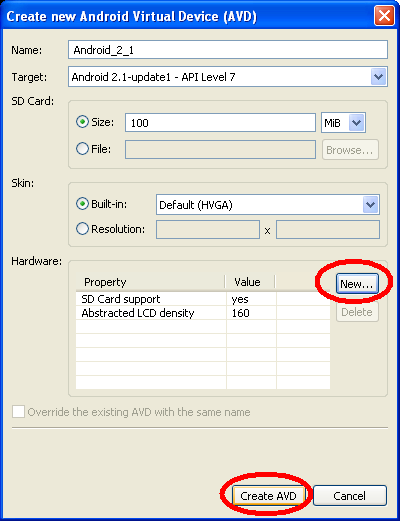 Step 3: Click on the "start" button, as seen bellow. 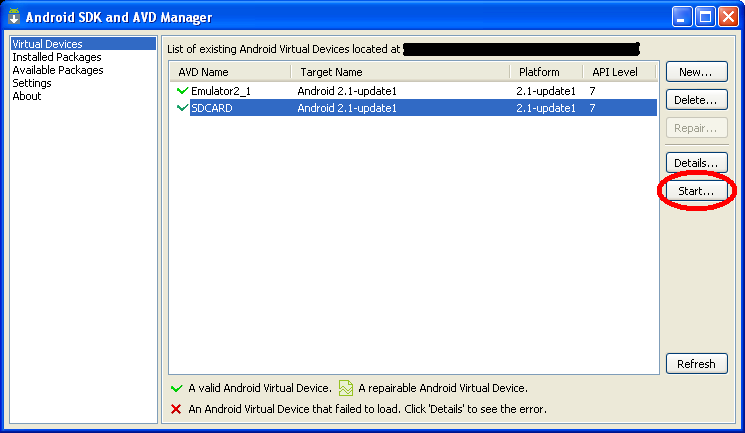 Copying files to the emulator

You can use a script similar to this one to copy files from your hard-drive to the emulator. Notice that the image must be running and that it must have sdcard support built inside itself.

Installing applications in the emulator

Android apps should be packaged in the Android .apk file format. For more information about how to create an .apk file that you can install on an emulator/device instance, see Android Asset Packaging Tool (aapt). After packing a file, it can be installed in the emulator by using the following adb call:

Installing the drivers and getting a reliable way to transfer executables and debug software with all the different Android phone can be a challenge in itself.

Astonishingly, Android phones don't come with a file manager o.O One can however simply download one from the Android Market. I suggest the following instructions:

1. Connect the phone to a WiFi or Mobile network

4. Locate and install the "OI File Manager" which is Free

The first thing to do when using Samsung Galaxy S is not believing the Samsung instructions. They will say that one should install Kies, their horribly crappy PC suite which is 130MB large and fails to install because the first thing that it does is failing to connect to a server in Korea to download even more files. Instead of doing this, following these instructions:

1. Go in the phone menu Settings -> About Phone -> USB settings. Change from "KIES" to "Mass storage"

2. Download and install 19 MB of Samsung USB drivers from: http://drivers.softpedia.com/dyn-postdownload.php?p=96692&t=4&i=1

3. Connect the cable of the phone

4. Drag the top menu of the phone down and mount the sdcard

Playing Sounds and Videos in the Phones