Difference between revisions of "Drag and Drop sample"

Drag and Drop is a common operation, that makes the interface user friendly, since a user don't need to push a lot of controls, but make an operation(s) in a single mouse move.

The following sample explains basics of the drag and drop. For the detailed information you should refer to other articles in the wiki and reference documentation.

Please note, since LCL, is partially compatible with VCL, some articles/examples about Delphi drag-and-drop may also apply to LCL.

Despite of the operation's simplicity from user's point of view, it might give hard-times to a inexperienced developer.

For the code, Drag and Drop operation always consists of the 3 steps (or more):

To simplify drag-and-drop handling, LCL provides “automatic” mode. It doesn't mean, that LCL does the whole drag-and-drop for you, but it will handle low-level drag-object managing (that's not to be discussed in this article). 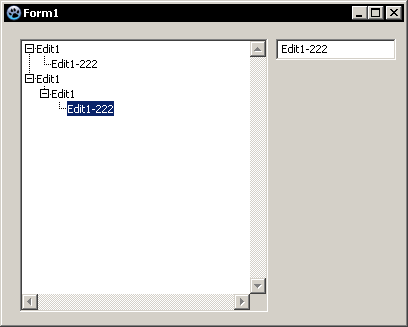 You can launch the application now, and try to drag anything around. You'll should not get anything working for now. But, if you press left mouse button on the Treeview, you'll probably see the cursor icon changed, but still nothing happening on releasing the mouse .

Let's make a drag-and-drop operation between Edit and TreeView. There the content of Edit will be “dragged” to TreeView and a new tree node created.

To initiate the drag, controls has a special method: BeginDrag() Create OnMouseDown event for the Edit

If you launch the application right now, and try drag and drop, you'll notice, that Edit starts the operation, but still nothing happens then you're trying to drop to TreeView.

It's because TreeView doesn't accept the data. None of the controls accept a data, by default, so you'll always need to provide the proper event handler.

Of course in some cases, TreeView might deny droping (if Source or data is cannot be handled), but for now, TreeView always accepts the dragging.

Run application and test. Everything should be better know, though still nothing happens on drop.

Run and test. It should be working now. Dragging a text from Edit to TreeView should create a new node.

Dragging within a controls

Sender and Source can be the same control! It's not prohibited in any way. Let's add an ability to a TextView, to change its nodes location. Since TextView is in automatic DragMode, you don't need to start the drag by using DragBegin() method. It's started automaticaly on mouse moved with left button hold.

Make sure you have “Accept:=true;” inside DragOver operation for TreeView source.

Modify DragDrop event, to the following:

That's it. If you run the application now, you should have both features working.