Difference between revisions of "Form Tutorial"

A short introduction on using Forms in Lazarus.

What is a Form?

The form (class TForm) represents a window or dialog box that is the user interface of an application. It is the container on which all other components (e.g. buttons, labels, edit fields, images, etc.) are inserted .

Now you have created a new, fully functional project with a form: 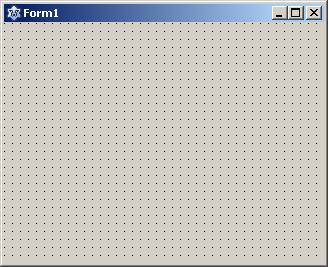 To run the newly created project, you can simply press the [F9] key or click with the mouse on the main menu icon

(or Main menu: Run -> Run). The project will be compiled and executed.

Nothing really exciting happens. The form (Form1) changes slightly in appearance and the points from the raster grid (help for positioning of individual components) disappear (as long as the grid points are visible, you also know that it is still in design mode): 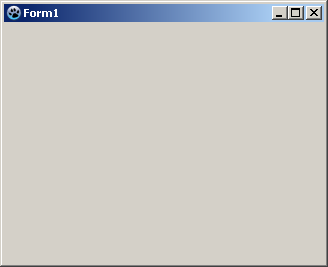 Next, you can place a TButton onto the form. This will be used later to allow the opening of a second form:

Select the TButton from the standard component palette

and click on the form: There is now a button placed on Form1 with the name and caption "Button1".

In order for this button to do something, you have to announce that you intend to do something when you click it. This can be regarded as a simple event. For this you need an event handler that is called after the click. The event handler for a mouse click can be quite easily reached by double-clicking on Button1 (or in the Object Inspector, select Button1 -> Events tab -> OnClick, then click on the [...] button). This creates a procedure TForm1.Button1Click in the code editor, which is always called (at run time, not in design time) when Button1 is clicked: 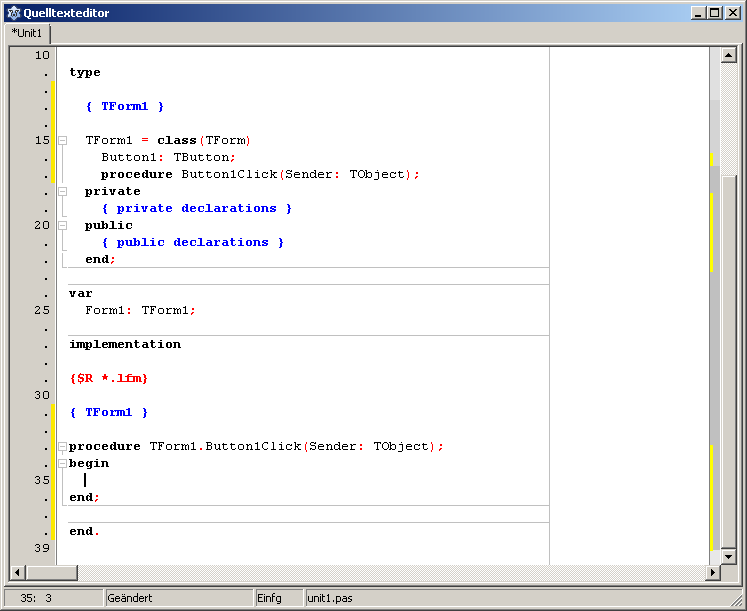 To make the application do something after clicking on Button1, add some code between the begin and end of the procedure TForm1.Button1Click like this:

Now run the form by pressing [F9], and notice that when the button is clicked the form caption and the button caption both change.

You can now experiment a little bit and learn how to use the standard components. To get started, I would recommend you to try samples of the following components:

There is additional helpful information in the Lazarus Tutorial.

The Use of a Second Form

The tutorial shows how to use multiple forms in a project. In this example, only two forms, Form1 (main form) and Form2, are created, but the process is identical for additional forms.

If you have worked through the first tutorial The first GUI app, you will need to delete the code between the begin and end of procedure TForm1.Button1Click. Otherwise you will need to create a new project (application), drop a button on the form, and create the OnClick event handler for this Button1.
Click the new button to enter a caption (visible text on the button). To do this, select the button (just click it once) and in the Object Inspector click Properties -> Caption, and enter the text "Open Form2".

In the Main menu click File -> New Form, to add a second form (Form2) to the project. Place a button (Button1) on Form2 and create the OnClick event handler for it. Change the caption of this button to "Close".

Now the project has two forms, each of which can be selected and displayed with Main menu Project -> Forms (or key combination [Shift] + [F12]). Alternatively, you can select the tab for a Unit in the Source Editor, then use [F12] to switch between the code editor and form designer for the form of the associated Unit.

In the code editor, go to the Form1 associated Unit (Unit1) and add "Unit2" to the uses clause:

Now you can call Unit2 (and thus Form2) from Unit1.

Next, edit the OnClick event of the button belonging to Form1:

Now you can start the project (

Difference between Show and ShowModal

Show:
This procedure makes a form visible and continues to execute the code of the calling control (Form1). In our example, the message (ShowMessage) appears almost simultaneously with Form2. You can also continue to use the calling form Form1. For example, it is possible to move it, or click the Show button again (but clicking ShowModal will cause an error).
Instead of using <myForm>.Show;, it is also possible to use <myForm>.Visible:=True;. The method Show does the following:

The only difference between <myForm>.Show;, and <myForm>.Visible:=True; is that the form displayed using Show will be on top of all other forms currently displayed.

ShowModal:
ShowModal halts the processing of code in the calling control (Form1) until the newly opened form (Form2) has been closed. In the example, the ShowMessage line immediately following ShowModal is executed only after Form2 is closed. The calling form is frozen: You can neither move Form1 nor click any of its buttons.
ShowModal is a function that returns an integer result, see TModalResult. The returned value allows branching based on how the form was closed.

Two Forms That Can Call Each Other

If you are modifying the previous example, remove "Unit2" from the Uses clause in Unit1.

Now change the code located behind the OnClick event of the button event handler:

Passing Variables to Other Forms

In accordance with the above example The Use of a Second Form, it is possible to declare a global variable in the interface part of Unit2. This would allow access in both Unit1 and Unit2 to one and the same variable (This is because by putting Unit2 in the Uses clause of Unit1, all variables declared in the interface part of Unit2 are also available in Unit1). This practice should be limited to a minimum, as it quickly becomes difficult to remember which individual variables are in scope, potentially increasing errors. It is better to use local variables, define a Property in a Class or, alternatively, as a variable in a class.

In this way you can in Unit1 access all public variables/properties/functions/procedures (general methods) of Unit2.

Use Another Form as the Main Form

If you determine after a while that you want to have displayed rather a different form or new form for the view at startup, you can under the main menu Project -> Project Options -> Forms: 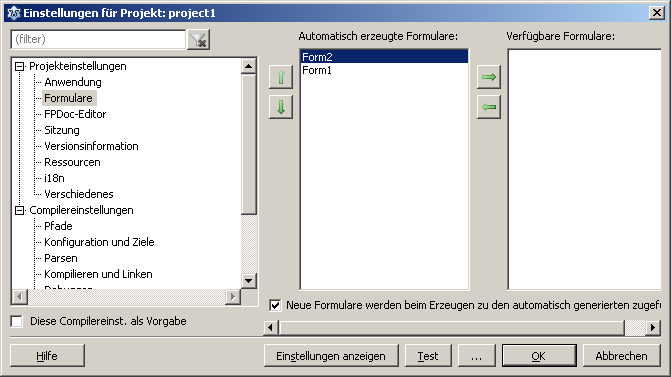 Alternatively, you can display, in Mainmenu -> Project -> Show .lpr file, that Project.lpr (Pascal code of the main program) and create the first form to be displayed as the first:

Save properties of the shape at end of program

In some applications, it is nice if the modified by user settings related to the position and size of the mold are saved at program end and be returned as when the program starts. But Lazarus is innately a fairly easy way using TXMLPropStorage or TINIPropStorage available.

A simple example will illustrate these functions:

You do not have to create all the forms that may be called during the term of an application at startup. Some developers generally keep none of it and delete the code automatically created when you insert a new form in a project from the Projekt.lpr out immediately. If you want to write a library that contains a couple of GUIs, you can not get around the dynamic creation of forms.

The following example will demonstrate how new forms by hand the Form Designer, can be generated without.

With a button click, another form should open that contains a button which, when clicking a warning appears that the form will close and then the form is closed.

Note: If a component has been created with an owner (TButton.Create(Owner: TComponent)), it belongs to the owner,
who is then responsible to free the component. Thus MyButton is freed automatically by freeing MyForm.

A few tips for manual generation of controls