Difference between revisions of "IDE tricks"

Since 0.9.27 you can right click on the 'New unit' (New form) speedbutton and set the file type that should be created. You can register more file types via the IDEIntf or the project templates package.

IDE Macros in paths and filenames

Getting the compiler command line parameters created by the IDE

You can copy the parameters from Project -> Compiler Options -> Show Options. Here the paths are relative to the project directory. So in most cases you can copy them without adjusting.

The parameters are also saved to the *.compiled file. For example if your project is called test1.lpi, then a test1.compiled is created. It is a simple text XML file, so you can just copy the options and adjust the paths to compile on another computer. The file is put into the same directory, where the executable is created.

For packages this works the same.

This way, you can compile your (hopefully working and bug free) code, outside of the Lazarus IDE.

Closing all editor files except one

Under GTK (available for Linux, macOS and FreeBSD) the source editor pages have a close button to the right of their page name. Press the Ctrl key while clicking on the button, closes all files except the clicked one.

Finding a component in the palette

You know the component name, or part of it, but you don't know on which page it was? This tool finds it: Right click on any component in the palette to open the popup menu. Select 'View all' from the menu; this will pop open a dialog(also you can achieve it by pressing Ctrl+Alt+P). Enter the (partial) component name in the 'Find' box to filter the list.

Open the package of a component in the palette

Right click on the component to open the popup menu, then choose open package.

Find the source declaration of a component in the palette

Right click on the component to open the popup menu, then choose open unit.

My application freezes my Linux desktop while debugging

X (your desktop) can freeze, when an application that grabbed the mouse is stopped by gdb (the debugger).

You can start a second X by:

AFAIK, a session is also started. You can connect to the vncserver with vncviewer.

Debug the application on the second server

In Lazarus, in the run parameters for your project, check "use display" and enter

Working on Lazarus itself means rebuilding the IDE many times. If you use the following tricks and have enough memory and a recent CPU, you should be able to recompile the IDE in a few seconds.

DebugLn of the IDE or a LCL application

The IDE writes many useful hints via DebugLn. You can get these this way:

This is a general LCL feature.

Finding the source file of an IDE window

Opening a Terminal Windows from the IDE

Its often handy to be able to open a terminal in your current project's working directory. Maybe to use a revision control system like git or svn or for a host of other possible reasons. Here is how to add a menu item to Lazarus's Tool's menu. Thanks to taazz and other contributors to the forum thread.

Those last two vary quite a lot between systems, if you don't know the first, try looking at a list of running programs, the word 'terminal' is likely to feature. For the second, once you know the terminal's name, look up its man page or google. 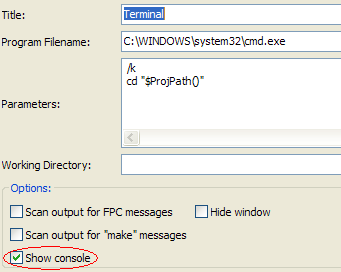 On the Mac, where everything is so much easier, all you have to do is:

On Windows, its also necessary to tick the "Show Console" as shown in the image on the right:

Object Inspector: Events: Frames: Jump to the source of an inherited event

The Object Inspector shows the events of inherited events as ClassName.MethodName. Double clicking will create a new event. Ctrl+Mouse click on the combobox will jump directly to the inherited method body, without creating a new method.

Events (Method properties) are special properties, because they need as value a code address pointer, which does not exist at design time. That's why Lazarus uses the same trick as the Delphi IDE: Every method value can be type cast to TMethod, which contains Data (the object or class pointer) and the Code (the address pointer). At runtime both are set. But at design time the IDE sets Data to a special key value for its internal lookup table and sets Code to nil. This means:

Because this only compares the Code. Use instead

Here is an example where the = operator fails: