Preparing applications for several languages has always been a bit of a mystery to me - until I finally tried. Then I found out that is is amazingly simple once I understood the first steps. I'd like to share this information with interested users of Lazarus.

You may jump right in. But it may be a good idea to learn something about the basic ideas behind that architecture. Therefore I'd urge you to read the wiki articles Localization and/or Translations_/_i18n_/_localizations_for_programs which explain the basic fundamentals behind the scene.

Before starting, I'd like to mention that I am writing this tutorial based on the trunk version of Lazarus which will largely be the basis of the upcoming version 1.2. You can use one of the "official" versions 1.0.x as well, but run-time switching of languages will not be working as shown below. 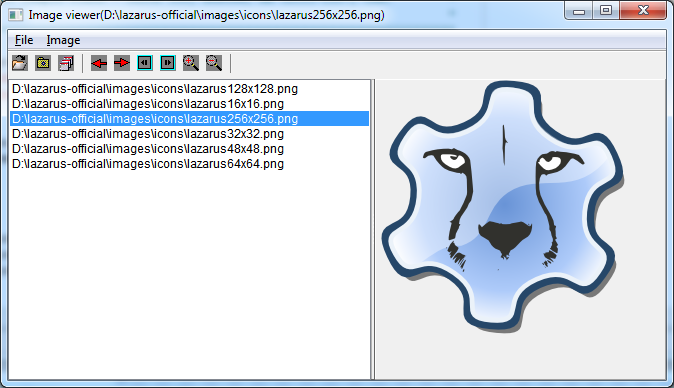 At first, we need an application that we want to translate. Looking through the example projects that come with Lazarus I found that examples\imgviewer may be a decent demo project. In order to keep the original, copy the entire project folder into a separate directory, e.g. imgviewer_multilanguage. Open the project file imgview.lpi, compile and run it. You'll see a typical application with a menu and some controls to show a file list and the selected image.

Let's convert this application to support translation into German.

During design of the GUI it shall be considered, that a string will have a different length in each language. That is why all components must have the Autosize property set to True. It is normal to expect that in some languages strings might be some 50% longer, but even 200% is not much unusual.

The GUI dimensions must consider the display of the device on which the application will be run. For a PC if a form is not scrollable, it shall not be greater that 1024x600 pixels (10" netbook display). This means that if only single-line string components are used, they shall fit properly in a 700x600 form, so when the form is enlarged to 1024x600 it shall be sufficient for other languages.

If several vertically positioned buttons are used and they are expected to equal width, besides Autosize= True they shall have .Constraints.MinWidth set to a significantly high value.

In order to prevent components from overlapping, anchoring shall be used.

Labels are often positioned to the left of the controls they belong to. In this case, precautions have to be taken to avoid that they extend into the control if they become too long. One option would be to allow multi-line labels by setting their WordWrap property to true (and AutoSize to false). Alternatively, single-line labels could be placed above the controls.

Only one modification of the project is required to enable translation. It is found in the project options as item "i18n". Strange word, isn't it? It is the abbreviation for "internationalization" and stands for "18 letters between the i and the n".

Put a checkmark in the checkbox Enable i18n. This activates the i18n Options underneath. Enter the name for the PO Output Directory. This is the folder where the files with translated texts will be stored. As you will see later, the translation files will have the extension .po. Let's use the folder languages. Note that this folder is relative to the folder containing the exe file. Be sure to keep this structure if you should later copy the exe to somewhere else. 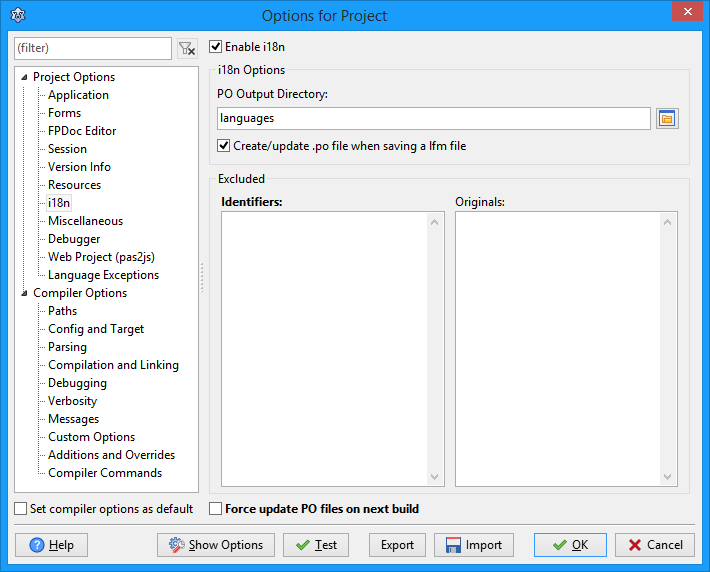 Keep the checkbox Create/update .po file when saving a lfm file checked - this updates the translation "master" file whenever you save - see below.

If you compile the project again, you'll find two changes in the project folder: At first there is a new file with the extension .rst. This file type collects the resource strings declared in a unit. Resource strings are the key elements of the translation system: whenever you want a string to be translated declare it as a resourcestring, don't hard-code it, and don't declare it as const.

As an example: In order to display an error message "File does not exist." don't call the ShowMessage procedure like

but declare the text as a resourcestring and use it as a parameter for the ShowMessage:

In the demo project there are four resourcestring declarations at the beginning of the implementation section of the main form (frmmain). In a larger project, it is conventient to collect all resourcestrings in a separate unit; you can access the strings from other forms and units and avoid cross-referencing of units this way.

The second modification of the project is a new folder "languages". It contains a file imgview.po. This file was created automatically by Lazarus and contains the resourcestrings in a form ready for translation. To create a German translation from that file create a copy and rename it imgview.de.po. "de" is the language code for "German" in the translation system, accordingly you can use "en" for "English", "ru" for "Russian" etc. See for example www.science.co.il/Language/Locale-codes.asp for a list of all language codes.

We could open imgview.de.po and add translations in a straighforward way. But there is an even simpler way as we will see later. Before doing that let's apply another modification to the demo project.

So far, the po files only contain resourcestrings that are explicitly declared as such. There are, however, a lot of other strings in our application which are not yet covered, like the entire menu and submenus, texts in labels or listboxes, etc.

There is an extremely easy way to include the strings of the user interface into the translation system: Simply add the unit DefaultTranslator to the main form's uses clause. When the project is compiled after this modification you'll find all strings in the po file.

For translation we could edit the po files directly by using a standard text editor. But it is more conventient to use a separate program optimized for this purpose. Good candidates are:

poedit shows a list of all resourcestrings: those explicitly declared, and those extracted from lcl controls by the DefaultTranslator. Select a string and type its translation into the lower memo. Repeat with all texts. Save. Before saving open then menu item "Catalogue" / "Properties" and check if "Charset" is UTF-8 - poedit sometimes forgets about this correct setting. 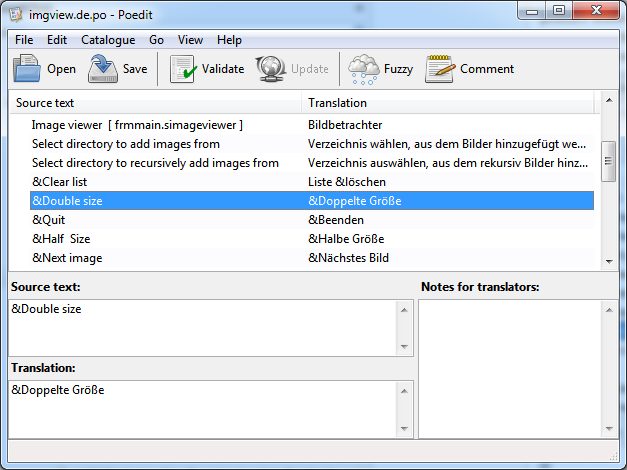 In the same way, you can add more languages: open the .po file of the the application in poedit, add the translations, and save it with the corresponding language code before the po extension.

Since the test application is hard-coded in English it is very easy to create an English translation file: after loading imgview.po into poedit, select each string item and press Ctrl+B which copys the raw resourcestring value into the translation memo. Save as imgview.en.po.

In its initialization code, DefaultTranslator seeks for the language setting of the currently used system. Therefore, if you work on a PC set up for German language the demo project will now be in German automatically. Detection of the default language and replacing the resource strings with those from the corresponding po file has been done by the translation system of Lazarus.

But what if your PC is not on German language? We can use the Lazarus translation system to switch languages at run-time.

First of all, the DefaultTranslator unit provides commandline switches --lang or -l to override the automatic language detetion. For example,

opens the German translation of the program even on an English-speaking system.

Of course, changing languages at run-time would be even more favorable. Unfortunately this is not possible with Lazarus 1.0.x out of the box. But it is no problem with Lazarus trunk or the upcoming version 1.2 where DefaultTranslator provides a procedure SetDefaultLang for switching between languages upon user request. (Of course, if you want to stick to 1.0.x you can add this procedure to the source code of DefaultTranslator.pas - you find all the necessary building blocks in the initialization code of the unit -, and save the modified unit in your project folder.)

At first, we need some control in the user interface to switch languages. What about a new menu item "Translation" and a submenu containing the available languages? In the menu designer of the main form add a new item "Translations" and an empty submenu. Then, for each language available, add the name of the corresponding language to the submenu. Of course you can also show a flag icon for each language - free flag icons are available from [1]. In the OnClick event handler call SetDefaultLang with the language code as a parameter, e.g.

Of course, you can use more sophisticated code which determines the language codes from the names of the po files found and creates menu items depending on the available translations.

Now you can click on a language menu item, and the application language switches to the selected language automatically!

Strings defined by the LCL

Here is one idea for refinement: The strings set up up for error messages defined by the LCL or used in standard dialogs or message boxes are not yet translated. Their translation is extremely easy: their translation files can be found in the directory lcl/languages of your Lazarus installation; they are named lclstrconsts.*.po. Pick those translations used by your application and copy them to the languages folder of our project.

This works because resourcestrings are pulled in from all language files for the active language found in the languages folder.

When creating multi-language applications translation of the strings is not the only task. Another issue is that format settings may change from country to country. Format settings - they define formatting of dates and times, the month and day names, the character to be used as decimal or thousands separator, etc. In Lazarus, the record TFormatSettings collects all the possible data. The DefaultSettings are used by the standard format conversion routines, such as StrToDate, DateToStr, StrToFloat, or FloatToStr, etc.

For Windows, there exists a procedure GetLocaleFormatSettings in the unit sysutils which returns the TFormatSettings for a given localization. The parameter LCID specifies the language code in Windows. Unfortunately I do not know of a convenient conversion between the LCID and the language codes ('de', 'en', etc) used by Lazarus. A conversion table for lookup can be found at [2]. In this table, you see that "German" has the LCID $407, and "English" has the LCID $409. Therefore, we modify the OnClick event handler for the language selection menu items as follows:

As a demonstration we add a status bar to our project and display the date when an image was created:

This procedure is called from the OnSelectionChange event handler of the files listbox:

Recompile the program and load some images. You'll see that the date format changes when the language is switched and another image is selected.

Unfortunately, this solution is valid only for Windows. I don't know how this issue could be handled in Linux etc. Maybe somebody does out there in the community?

Although some issues of localization (e.g. right-to-left mode, sorting order) have not been discussed I hope that this tutorial covered the most important aspects and is at least a good starting point for beginners.

In the end, here is the final screenshot of this tutorial: it shows the image viewer application translated to German. 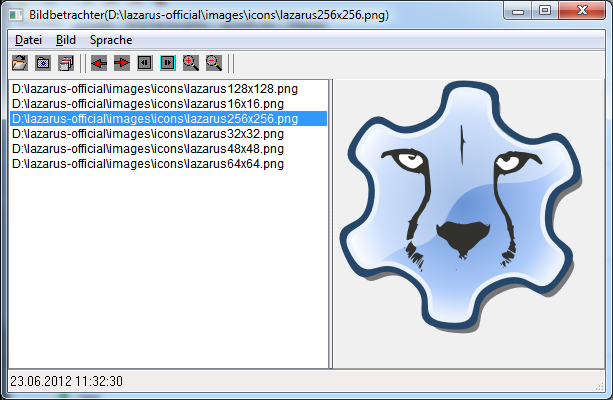