Difference between revisions of "fpcunit" 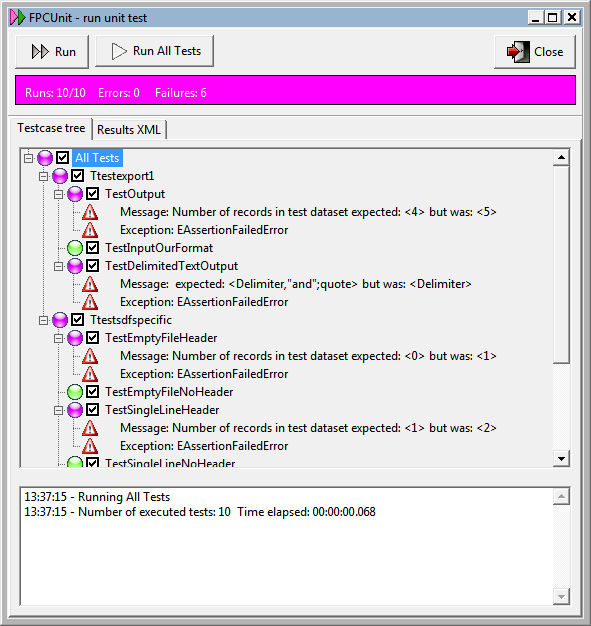 You write your own tests as published procedures in the test class. You can use AssertEquals etc to specify what should be tested.

If the test fails, an EAssertionFailedError will be raised with the message you specify in Assert*. This way, you can add a series of subtests and tell which subtest failed. Note: the test runner will stop at the first assertion failure, so subsequent subtests will not be performed. If you do want to always test everything, split out these subtests in separate test procedures.

The console test runner can output in XML, plain text and latex formats. The GUI test runner outputs to XML if needed.

You can use your own "listener" that listens to the test results and outputs the test data in whatever way you want. Create a T*Listener that implements the ITestListener interface. It's only 5 required methods to implement.

In your test runner application (e.g. a copy of fpctestconsole), add a listener object; register that test listener with the testing framework (e.g. your console test runner) via the TestResult.AddListener() call, and it will be fed test results as they happen.

An example of an available extra listener is TXMLResultsWriter in the xmlreporter unit in <fpc>\packages\fcl-fpcunit\src\xmlreporter.pas.

An example of an adapted test runner that uses an extra listener can be found in <fpc>\packages\fcl-stl\tests\testrunner.pp

The consoletestrunner is compatible with FPC so you don't need Lazarus to compile it. The Lazarus version is slightly different to the one in FPC (e.g. use of UTF8 output etc).

The GUI runner is easier to use.