This document will explain the basics about compilers as well as provide links to well-known Pascal compilers and explain how to set up Free Pascal.

About Computer Languages and Compilers

When talking about computer languages, there are basically three major terms that will be used.

The program that accomplishes the translation is called a compiler. This program is rather complex since it not only creates machine language instructions from lines of code, but often also optimizes the code to run faster, adds error-correction code, and links the code with subroutines stored elsewhere. For example, when you tell the computer to print something to the screen, the compiler translates this as a call to a pre-written module. Your code must then be linked to the code that the compiler manufacturer provides before an executable program results.

With high-level languages, there are again three basic terms to remember:

The de facto standard in DOS and Windows-based Pascal compilers is Borland Pascal. Before it came out, most Pascal compilers were clumsy and slow, strayed from the Pascal standard, and cost several hundred dollars. In 1984, Borland introduced Turbo Pascal, which sold for less than $100, compiled an order of magnitude faster than existing compilers, and came with an abundance of source code and utility programs.

This product was a great success and was prominent for almost a decade. But in the 1990s, the world was moving to Windows. In 1993, the last version of Turbo Pascal, version 7 for DOS, came out. After that, the demand for DOS programs plummeted and Borland (briefly known as Inprise) focused on producing Windows IDE/compilers (e.g. Delphi). Later, Borland sold its compilers to Embarcadero, who still regularly update Delphi.

This tutorial will only deal with console-based programming, where the computer prints lines of data to the screen and the user interacts with the program using a keyboard. The goal of the tutorial is to teach how to program in Pascal. Once you've learned that, you can easily look at a reference book or another web page and pick up graphics and windowing systems on your own.

Although old commercial Pascal compilers are often available for download (e.g. Turbo Pascal 5.5 from the Borland Museum and Symantec Think Pascal (Macintosh), see The Free Country's Free Pascal Compiler List), computers have progressed much since the 1980s and early 1990s. We are no longer stuck with 8.3 filenames on DOS or non-preemptive multitasking on Mac OS. Using an old compiler is fun in the same sense as playing an old game on an emulator is fun, but the open source movement has produced good compilers for modern operating systems, and a beginner will find it much easier to use those.

Free Pascal is generally considered friendlier for novices, and strives to emulate Borland Pascal in many ways, though both will serve fine for learning Pascal.

As most users of this tutorial will be running Windows, here's how to set up Free Pascal and get to the point where you're compiling a program on a modern Windows operating system:

With programs that don't expect user input, you'll see the program flash on a black screen. But the program completes in the blink of an eye and you are returned to the IDE without seeing the results of your work. There are two ways around this: 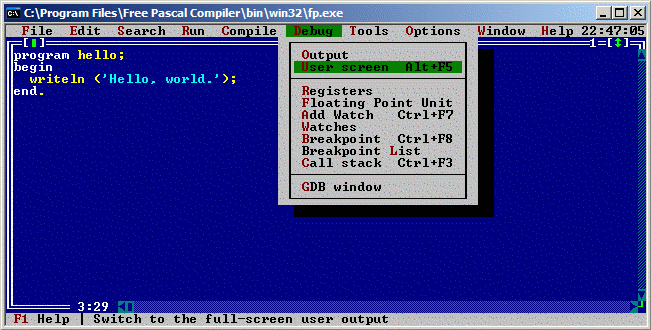 Note that an .exe file was created in the directory where you saved your program. This is the executable. You can go to the Command Prompt, change to the directory, and run this executable straight. You can also double-click on it in Windows Explorer (and it will still flash by quickly if it ends without requiring user input).