Cocoa-WS should be using device-dependent colors to match colors across other widgetsets.

That applies to color of Pen, Brush and Font.

The “Device” color-space names represent color spaces in which component values are applied to devices as specified. There is no optimization or adjustment for differences between devices in how they render colors. If you know exactly which device is connected to a system and you want to print or display a certain color on that device, then it makes sense to use a appropriate device-dependent color space when creating NSColor objects. However, it is usually not the case that an application knows which devices are connected and their specific color spaces. If you specify components of a color in a device-dependent color space—let’s say NSDeviceRGBColorSpace—and then have several displays render this color, you will see several slightly different colors.

Cocoa provides its own API to show a popup hint window. Thus Cocoa doesn't provide must information on how hint popup window should actually be shown.

On dark theme of Mojave system, it became a bit more complicated. Besides a different fill color for darktheme, the popup window also draws a border of light pixels.

NSFont class provides a number of class methods to get proper system font without selecting the font by name. The same of getting system-native font size.

macOS native DPI (aka PPI) is 72 (it matches the basic typographic resolution).

For comparison: Windows native DPI is 96. You can read more about history of this difference here

In order to achieve the ease of use and design for cross-platform applications, Cocoa (screen) DPI is also emulated (by LCL) to be at 96 dpi. What that actually means is that font sizes between LCL applications and macOS native applications will be different (at roughly 33%).

This can be adjusted by changing the CocoaBasePPI variable at run time.

The following objects are used to implement HANDLEs for graphical objects

In order for a bitmap (a 2d-array of pixel values) to be drawn, a NSBitmapImageRep object.

The NSBitmapImageRep is immutable. Its contents cannot be changed after the initial drawing (the pixel values seems it be copied within Cocoa).

If a Bitmap contents was modified (i.e. by using (Canvas) Drawing methods or by direct access via ScanLine), the bitmap must re-create NSBitmapImageRep before the next drawing.

For PixelFormat 32-bit the pixel format is as following:

There's an additional code added for processing DrawRect event. If a control was resized during a draw rect, then the resulting graphics output could be corrupted. 32970

As an example TTreeView component could be used. It updates scroll bars during the initial paint. The update of scroll bars is causing a client rectangle to be changed, causing a glitch when drawing the control for the first time

Naturally, the next repaint fixes the problem right away. 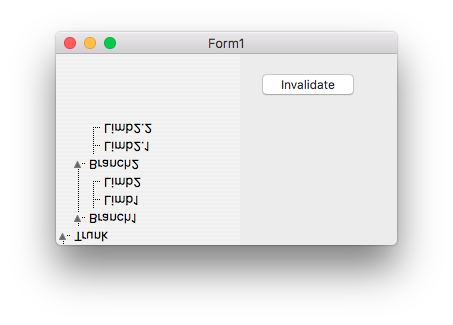 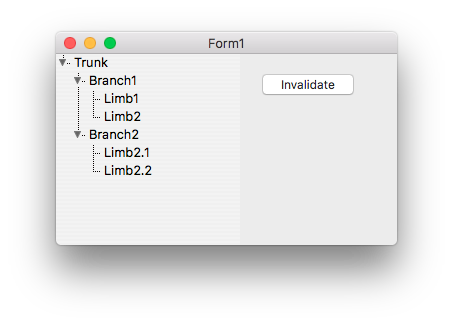 Sending another event into Cocoa event queue, to repaint the control again would cause flickering and yet bad user experience. Forcefully calling for a repaint one more time seems to be resolving the problem, while potentially is an overhead due to double job done.

Also double drawing could cause artifacts on controls that are using any sorts of transparency: 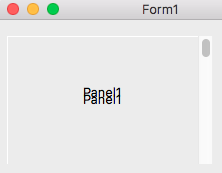 The best solution is to avoid changing of the control bounds at all during drawing operation.

HITheme API is deprecated by Apple together with Carbon. It's still available in OS X, but for i386 only. It will presumably be completely removed on 64-bit only macOS.

However, some LCL controls cannot be mapped to existing Cocoa provided controls and thus might require some "custom drawing". The drawing should look system native though. In order to achieve that the NSCell family could be used. NSCell allows drawing (hit-test and as well as handle user input) for OS X native elements. If Apple changes the appearance of controls (cells), the LCL application would "pick-up" the look automatically.

Deprecated? macOS version specific? In order to be drawn NSCells require the presence of NSView, thus it's hard to use them for the implementation of LCL TTheme APIs. NSView doesn't seem to be required. At least NSCell operates without the presence NSView. However, per Apple's documentation it's mentioned that the drawing would occur in a "focused" control. That helps to use NSCell for on-screen drawing, but is a big question for bitmap drawing.

It might be that Apple moves away from using NSCell. The class itself is not yet deprecated, even though Apple suggests that NSView should be used more extensively.