The IDE can rebuild Lazarus and this dialog defines what is rebuilt and how. It does that by calling make and some extra parameters. Only the custom packages, that you installed yourself are compiled by calling the compiler directly. 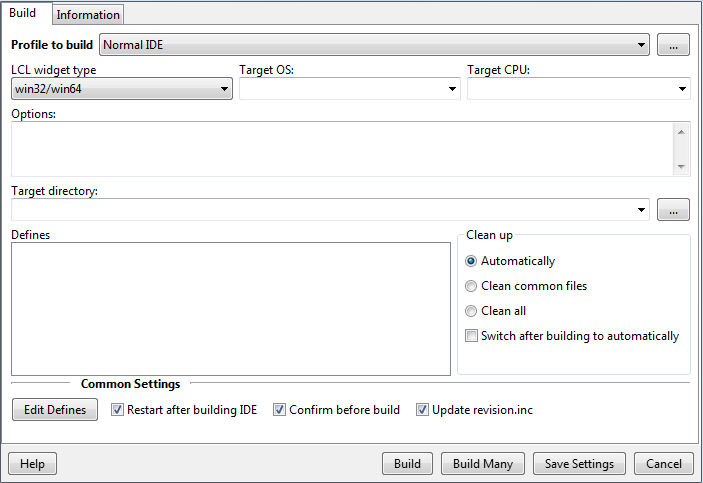 Just click the Build button. The IDE will rebuild all changed packages and then itself. If the Restart after building is enabled, the IDE will close and the new IDE will be started.

pre 0.9.31: Click on the 'Set to "Build All"' button at the top. This will setup the options to rebuild everything. Then click on 'Build'. The dialog will close and rebuild all parts of Lazarus - the LCL, its current interface (winapi under windows, gtk under linux, etc.), the needed packages and the IDE.

The parts are ordered. That means if you recompile the LCL, all parts below needs to be recompiled as well.

Here you can select the LCL interface, which will be built. The LCL (Lazarus Component Library) contains two layers: The platform independent part and the platform dependent part (e.g. interface to gtk or win32). Some interfaces work on several platforms, some not. See below for details. In most cases, you don't need to worry about this. A normal application only use the platform independent LCL, which automatically use the right interface. Fiddle with this option only, if you want to use one of the unstable and incomplete interfaces or if you want to cross compile to another platform. See the list below.

Note: The LCL interface on this dialog only applies to the building of Lazarus (including the LCL). All other IDE features use the compiler options (Project > Compiler options).

As the details above may be out of date., see the detailed and current widget set status in the Roadmap article.

Provide here options, that will be appended with OPT parameter.

To compile the IDE to another directory. This option does only work for the IDE, no other part supports this.

When building the IDE succeded, restart the IDE.

To avoid rebuilding the IDE by accident, you can here enable a confirmation message. If you are a crack that never failes then disable it.

With the "Edit Defines" button you can setup flags.

If something went wrong

After rebuilding the IDE, it crashes or is unusable and you don't have a backup:

You can easily compile a basic IDE on the command line.

This will compile an IDE without special packages. Your old installed packages are not installed, but are marked for installations. That means when you build the IDE with the IDE, it will create an IDE with all your packages. If you installed a buggy package, then you can simply open the package and uninstall it.