This tutorial is an attempt to demonstrate the use of Lazarus Data Modules to isolate the data access components of a project from the program logic associated with the access. Such isolation makes program maintenance and debugging easier.

The tutorial was developed using Windows 7 and SQLite3 as the database, with Lazarus 1.0.8 with FPC 2.6.2; however it should work with earlier versions. Similarly, other DBMS and Operating Systems should require minimal change, if any.

Simple - after following the Lazarus Tutorials:

The sample shown here uses just 2 tables with simple queries, but it can be expanded to include more options with each table.

In the Lazarus IDE, create a new Application and then click File --> New --> Data Module

You will be presented with a window as if you selected 'New Form': 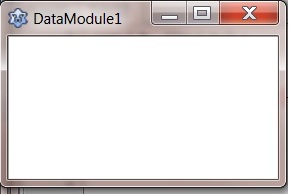 Everyone has their own way

Your use of data modules will vary to suit your own needs. but as an example, I have at least 2 data modules:

Unit: DataModule1 On this module I 'drop' a T*Connection and a TSQLTransaction.

DataModule1 is used as the connection for all queries.

I then create a DataModuleN for each table or view.

Each DataModuleN will need to have the DataModule1 unit (unit2 in this example) added to the USES clause to connect to the database.

From here everything is the same as stated in SQLdb Tutorial1. The components are connected in the same way and access is identical.

In this example, DataModule1 had nothing more than a Connection and Transaction, but in a 'real' application, this container would typically also hold global non-visual components to be used by the application.

For example, Load and Save INI settings, TOpenDialog, TSaveDialog, etc. The concept here is to isolate data access from the business logic of an application. A change in data source for any application is never a minimal task, but having the datasources isolated will make the change much easier.

The importance of the DataModule will become even more obvious when developing other applications using the same database and tables. The data module can of course be reused in the new application.